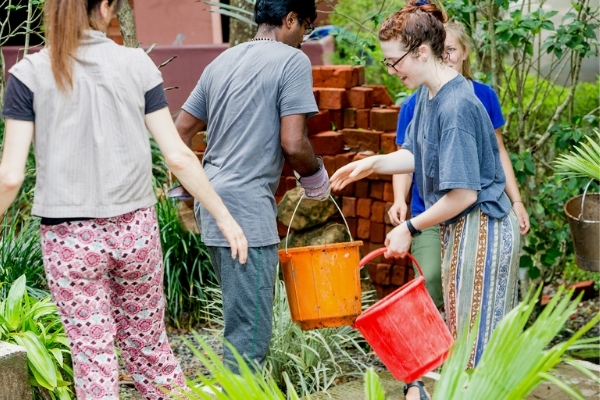 1. Karma Yoga | The Yoga of Action

Karma yoga—the yoga of action—teaches us how to work and serve selflessly without attachment, egoism and expectation of gain or reward. A karma yogi learns to serve others with no expectation of reward, without desire for the fruit of the action, working for work’s sake only, as an act of worship. By detaching ourselves from the fruits of our actions and offering them to a higher power we learn to sublimate the ego. In the practice of karma yoga it is not only the action that is of importance but also the attitude and motive while doing the action. Karma yoga prepares the yogi for the study of higher truths—the knowledge of the Self. Action done in the right spirit, performed as an offering, as a sacrifice without expectation of reward purifies the heart and makes it fit for the practice of steady concentration, meditation and the dawn of higher knowledge. By changing our attitude and emotional relation to it, we spiritualise our work. The work will continue but the work idea in it will disappear and in its place will remain sacrifice and worship. The work becomes transmuted though our spiritual approach and attitude towards it. All acts become sacred—there is nothing small or great or not sacred in any type of work. Through this practice we learn to serve others with tolerance and patience and experience the joy of supporting those around us. Our heart purifies, the ego thins and we begin to experience deeper levels of the Self. 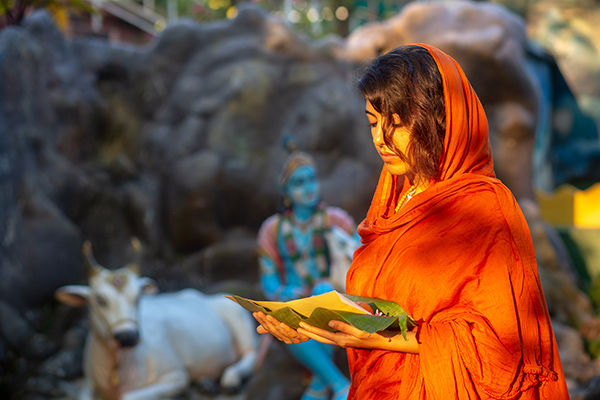 2. Bhakti Yoga | The Yoga of Devotion

Bhakti yoga is the path of devotion, of channelling emotion into love. It is the path of transmuting our emotional nature to a higher purpose. Bhakti is intense devotion and supreme attachment to God. It is the path to intuitive realisation of the Supreme through intense love and affection. Bhakti is a higher level of consciousness in which, through love, we become one with God and attain Self-realisation. The practice of bhakti yoga brings humility, compassion and unconditional love. Working with our emotional energy, through faith, prayer, and worship we surrender ourselves to God and transform our emotions into selfless devotion. This sublime love eliminates restlessness and distraction and opens the heart; we see the universe as a manifestation of the divine. We practice love for love’s sake. There is no selfish expectation, nor is there fear. The enemy of devotion is egoism and desire—lust, anger and greed. The path requires thorough discipline and a training of the will and the mind. Love, surrender, service, sacrifice and faith are all practices on the bhakti yoga path. We develop love towards all things at all times. Prayer, kirtan (chanting the names of God), japa (repetition of God’s name), hearing stories of the Lord, serving saints and holy ones, satsang, rituals and worship, charitable acts and service in God’s name all lead us to a higher level of consciousness and union with the Supreme. 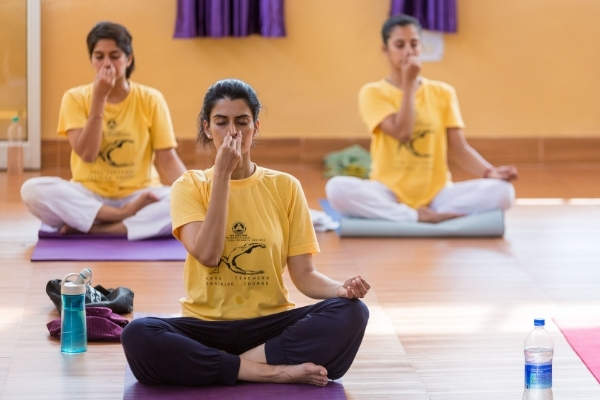 3. Raja Yoga | The Yoga Of Meditation

Raja yoga aims at the purification and control of all thought-waves or mental modifications of the mind. Based on the Yoga Sutras of Patanjali, the path of raja yoga consists of eight ‘limbs’ or steps (ashtanga) that transform mental and physical energy into spiritual energy. The path is considered to be a complete scientific approach to Self-realisation. Raja yoga is the practice of stilling or restraining the thought-waves through a systematic control of body and mind, culminating in meditation and the superconscious state. It teaches how to curb the outgoing mind by going beyond the mind and attaining Self-realisation, a pure state of bliss. The ladder of raja yoga is comprised of the practices of yamas and niyamas (ethical teachings), asana (postures), pranayama (control of the breath), pratyahara (control of the senses), concentration and meditation leading to samadhi (super-conscious state) in which all the mental impressions—which bring about successive births—are in Swami Sivananda’s words ‘absolutely fried up’. When we control body and mind the state of meditation comes easily and naturally. When the mind is in a constant state of thought, we cannot see or access our own true nature. We cannot realise our own true Self. Of ancient origin the methods of raja yoga are considered to be some of the most powerful techniques available today to combat the tremendous stresses and strains of modern living. 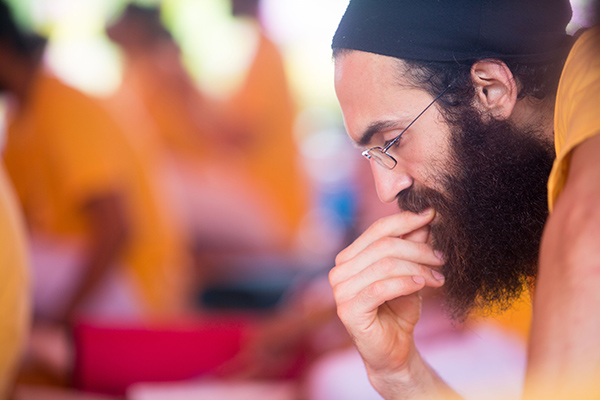 4. Jnana Yoga | The Yoga Of Knowledge

“Jnana Yoga, or the science of the Self, is not a subject that can be understood and realised through mere intellectual study, reasoning, discussion or argument. It is the most difficult of all sciences.” – Swami Sivananda. Jnana yoga, the intellectual approach to spiritual evolution, is based on the teachings of Vedanta, a philosophical system of non-duality, in which human speculation has reached its very pinnacle. It is a unique system of thought that demands a subtle, sharp intellect to understand its fundamental principles. It is a path of self-analysis, discrimination, reflection and enquiry. Vedanta proclaims that there is a common self or common consciousness in all. It teaches the oneness or unity of the Self. Following the teachings of Vedanta the jnana yogi uses the mind to inquire into its own nature, and through this practice learns of the essential divinity, the unity of life, and the oneness of consciousness. The yogi learns to discriminate between the impermanent and permanent, the real and the unreal, to remove all barriers that separate one from another.  Jnana yoga requires a firm foundation in the other three paths of yoga (karma, bhakti, raja); without fully integrating the lessons of the other paths, the practice of jnana yoga can become idle speculation. Jnana yoga can be practised at home, in all circumstances of life, and requires only a changed mental attitude or angle of vision.

Page load link
We use cookies to give you a better experience. By using our website you agree to our policies. I accept.
<script type='text/javascript' src='https://sivanandayoga.org/wp-content/themes/Avada/inclu